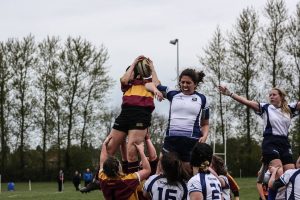 I am excited about this year’s women’s programme as we have a wealth of home grown talent making themselves available for Leicestershire. I have watched a lot of local matches over the last few months and have a good insight into the potential of the player base, even looking across the borders for players that are eligible to play for the CB.

Unfortunately, our two local England grand slam winners Emily Scarratt and Vicky Fleetwood are no longer able to commit with the World Cup just around the corner. However, we have selected a very strong training squad 35 players with great potential and an eye on the long-term future as we have 4 current under 18’s in the squad and 2 from last season.

This year has seen a huge growth in female rugby with all our teams having strong seasons:

Next season Loughborough have the honour of playing in the the newly formed women’s Super League. This has a benefit to County Rugby in a very positive way driving up standards and the Leicestershire Squad continue to have a healthy competitive edge. We have retained 9 of the previous seasons squad marking a culture shift in women’s representative rugby.

The women’s county championship has given the women a competitive opportunity to step up and represent their County with pride and honour. We have retained 9 of the previous seasons squad marking a culture shift in the Representative Game. Additionally, the County Squad will have the opportunity to win Leicestershire County Caps by playing in 5 matches for at least 30 minutes in line with their male counterparts.

Why not come and see some great rugby at our forthcoming fixtures:

14 May vs Oxfordshire @ Banbury RFC (tbc)