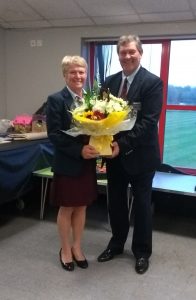 Following this year’s Annual General Meeting, Leicestershire Rugby Union are delighted to appoint Barbara Crellin as President for the 2019/20 season. Barbara has already spent a year as President Elect and now takes over the reigns from outgoing President Steve Rice. Barbara joins us from Oakham RFC and is looking forward to a full year of appointments with a keen interest in Age Grade Rugby where, like many of us, became involved with Rugby Union when her son started to play.

With Barbara’s appointment, we turn to thank an number of LRU volunteers who have decided to step down from their roles within the union.

Firstly, we say thank you to Steve Rice. Steve has been an active member of the LRU for some time now with position of both Chairman and President under his belt. Steve has also championed the Leadership Academy within Leicestershire and will continue with his involvement from the sidelines to encourage promising leaders from clubs.

Also, stepping aside is Dean Toon. Dean has been the Age Grade Rugby Chair for 5 years and done a fantastic job under some challenging times with changes in rules to the youth game. Dean has also sat on the Executive Committee for that time and the PFR committee. Further still, Dean instigated and managed the creation of a new website which was a lengthy and time consuming process, but definitely worthy of the investment. Dean’s successor is Liz Causon from Hinckley RFC. Welcome Liz!

From the county representative team, we say thank you to Simon Chaperon. Simon has had a number of roles within the Leicestershire. Senior men’s and U20s Manager, procurement manager and county cup liaison officer. Over a the past 10 years Simon has had to work very hard to make sure that all  players, managers and supporters of all these events have the best experience possible. Leicestershire Rugby Union would like to wish Simon all the very best for the future.

In addition, Stuart Davies has been working as the Leicestershire U16s Boys Manager for the last three years. It is with great sadness to lose Stuart as he has done a fantastic job in building the relationship between Leicester Tigers young Academy and Leicestershire. Stuart feels it’s time for some else to continue to move this forward. Thank you Stuart.

Brian Hesford, Discipline Secretary has been looking to step down for some time, but wouldn’t do so until a replacement was found. Brian is a county stawart and has held a variety of roles with the game including LRU President in 2016/17. No doubt we will see Brian as he is a regular supporter of county events and is remains active within his own club, Melton Mowbray RFC.

Mark Powell has stepped down from his position on the executive committee Mark was the Director of Rugby for 3 years and saw both the men and ladies win their county championship finals in 2017 under his reign. Mark has been involved with selection processes for talented players to play for regional teams and has also done a lot of work with the Leicester Tigers Academy to bring through young players into the professional game. Thank you for your expertise, time and work on the executive committee over the last few years.

We also thank Yvonne Copson who has been secretary for the women and girls forum, but has decided to call time and we say welcome to Eleanor Wilkinson who has already taken up the position.

Finally, we thank Kim Swift who has been LRU treasurer, and actually stood down last season, so thank you Kim!