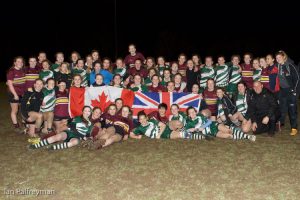 It was a chilly, but fun night at the club with all the core values of rugby on display. The evening began with National anthems sung in fine form before the boys kicked off their match against Market Bosworths U16 boys.

The second match featured the U18’s girls against Leicestershire County U18’s girls. Both matches were referee’d by Jenny Burrows who did a great job. The score did not matter in the end as all the players had a thoroughly enjoyable evening and captains were presented with The Leicestershire shield from LRU President Pauline Harding.

Here is an account by Kiara Jefferies, one of the players from the girls squad about their visit to the UK.

March 8-18 was a whirlwind of events for the Ontario Highland U18 girls team as they travelled throughout Wales and England. They made many stops during their 10 day tour, watching a Six Nations game in Cardiff, taking on the Cardiff Blues girls side and visiting the town of Rugby on their way to Market Bosworth. Stopping in Rugby was a great experience for the team as they learned more about the history of the game and had the opportunity to visit the Birthplace of the game at Rugby School. Many of the girls have marked this as a highlight of the trip after having the chance to take a photo under the uprights of the first every rugby pitch, this was a luxury for both teams as the pitch is not open to the public.

Following the stop in Rugby, the team had 24 hours to practice and prepare for their second match of the tour where they would take on the Leicestershire girls U18 team. Heading into the game the girls team were excited to play against an English side where they could learn more about the game and how it is played on the other side of the world. As the match began, both teams had to quickly adjust to the muddy field conditions, fighting hard for every ruck, loose ball and scrum. After the game the score did not matter as both teams came together for a social hosted by the Market Bosworth Rugby Football Club. During the social Highland named Leicestershire scrum half Zoe Frew as Woman of the Match, and Leicestershire named the Highland Eight-man, Emilie Stevens, Woman of the Match.

For the Highland squad, visiting Market Bosworth was a highlight of the trip as they enjoyed dinner and socializing with players from the Leicestershire side. Many players from both teams have been keeping in touch since the match, hoping that one day both sides can meet for another match, this time in Canada.

Some photos from the evening are below. Thank you to Ian Palfreyman.